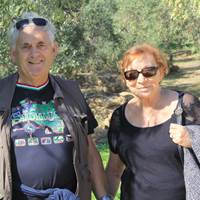 Marie Josée and James Hamel will be very happy to receive you in their guest rooms at the Chateau de Vouilly, We are located in Normandy in the regional park of the marshes, near the landing beaches, near Bayeux,
From June 10 to August 10, 1944 the press camp of the American army was installed in the castle,
Robert Capa, Ernest Hemingway, Walter Cronkite, Ernie Pyle, Andy Roony and 50 other war correspondents relataient fighting for the liberation of Normandy,
Each morning in the large dining-which today serves the breakfasts of our host-there was Bradley General of the press conference or his deputy Colonel Dickson,
Many journalists in 1944 returned to Vouilly, John G. Morris did us the honor of spending 4 days in our walls for the 70 years of the D-Day in June 2014, on this occasion he presented his latest book "Somewhere in France, "all articles written in Vouilly in 1944 began with the words,
For old times Vouilly was a strategic place because situed on the heights of the Aure valley and the sea was present at that time, already a Roman camp had been built (year 296 to 400 years) to monitor and stop the "maritime invasions
The first castle was built in stone back of the victory of William the Conqueror to 'Hastings in 1066, it was preceded by a feudal mound,
The castle Vouilly moated in water-présentes- always had a drawbridge dismantled in 1850,
After being rebuilt and refurbished many times, Major work in 1750 saw the creation of a French garden with a beautiful orangery (classified) and two pavilions,
A pond was fitted with a mill, but most of the work focused on improving the living comfort in the castle:drilling large windows, installation of distribution corridors on the ground chased and the first floor Part of the building was removed near the drawbridge that was the end of the castle courtyard ,,,, he then became nice and "open to other"
The Hamel family arrived in this place in 1934, near the farm continues its work today in organic dairy production
Since nearly 30 years our 4 spacious and comfortable rooms have received guests from around the world,
A large garden with rose garden has been recreated by Marie Josée (former nurse), a path to the pond tower was built (great place for pictures of nature)
The pigeon nests in 1050 (bearers) is open to the public on request,

Free WI FI is present in all rooms and the dining room,

We do not do meals -the garden- tables and chairs are available-,

Your Comfort, Our Services